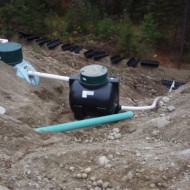 Sites where the distribution field can be located at a lower elevation than the septic system discharge, provide the opportunity to avoid the cost and complexity of pumped delivery. This saves on standby volume, pumps, wiring, controls, installation and maintenance.

Performance in pumped systems can be fairly accurately modeled by engineering calculations, then a pump selection can be made to deliver the design performance. These calculations assume totally flooded flow in the system piping. The same principles of fluid dynamics apply to the FLOUT® system, however, potential entrapment of air in the transport pipe from the FLOUT® to the septic field will reduce flow rate and residual head compared with the theoretical maximum for a given design.

Flow rate from the FLOUT® is largely determined by:

Squirt height will go up when the field resistance is high (small field) resulting in a lower flow rate and higher residual head. Conversely, squirt height will go down when the field resistance is low (large field) resulting in a higher flow rate and lower residual head. A double Flout® should be considered for larger fields.

Premier Plastics has carried out a series of tests to better understand the interaction between effluent and air together in the transport pipe (i.e. water wants to go down, air wants to go up) where either water flow down or air flow up could be the dominant force, or at times be equal opposing forces. Air behaviour was observed through clear acrylic tubing. Tests were carried out for 20 to 120 orifices at 1/8” dia. and 3/16” dia. Average total static head used for tests – 142” and 42”. Detailed results for specific configurations are available upon request on our website.

The data we have accumulated offers engineers and designers insight into the actual dynamics of these systems in anticipation of a greater comfort level with the selection of FLOUT® Dosing Systems. A simple method to determine feasibility for a specific site is proposed. We welcome your comments on this work.

FLOUT® (floating outlet) is a trade name of Rissy Plastics in Torrington CT.

­ A flow rate that slopes up, then down indicates that the air has completely purged or reached a steady state part way through the cycle and then declines with the declining head in the tank.
­ Flow rates that show a slow decline towards the end of the cycle indicate that air is being drawn through the vent inside the tank thus reducing the residual head at the field.

Note: measurements of flow rate and residual head were taken at the entry point to the (simulated) field. Piping used for the transport pipe was 2”, 3” and 4” dia. clear acrylic.

Systems where fully flooded flow is necessary to maintain a desired squirt height must be designed to ensure air is purged quickly at the start of the discharge cycle. Trapped air will be at the pressure generated by the head in the Dosing tank and will act to limit flow rate. We have found that a 1” vent connection placed a few feet down the sloped section of pipe will purge air that would otherwise be trapped. At this point the effluent would have increased in speed and reverted to channel flow from fully flooded flow in the horizontal section of pipe leaving the flout. Venting the line to atmosphere reduces the ‘back pressure’ on the tank and allows trapped air to escape, and the transport pipe to flood quickly. This venting option can result in a 50% increase in squirt height.

Click here for our new flyer for type C, where the field is level with the septic tank.

Our Commitment to Quality

Providing first class service to our customers is the number one objective at every desk and workstation at Premier Plastics Inc.. The focus of our well trained and stable workforce is consistency, dependability and speed of service – supplying quality septic system and water tank products that reflect a strong innovative and technical capability.

Got something on your mind? – Not sure about how to do it?
Just drop us a line with your questions or concerns and we will have an answer for you by email or telephone within a couple of days. No question too simple. No questions too technical.