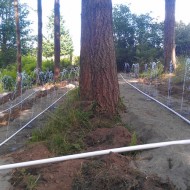 Effluent must be spread uniformly across the field. If not, some parts of the field are overloaded while other parts are idle, compromising filtration, and bringing on untimely failure. The best way to achieve good distribution is with dosing, which forces a large volume of effluent rapidly into the field, balancing distribution to all corners. Another important benefit is the ebb and flow action, which pumps oxygen into the field, reducing soil clogging biological mat formation.

Dosing can be done a number of ways. Siphons or pumps are traditionally used but each has disadvantages. Pumping downhill is obviously wasteful as well as complicated and expensive. Bell siphons are simple and inexpensive but difficult to incorporate into a pre-cast chamber, require priming, drawdown cannot be adjusted, and when they stop dosing, are very difficult to diagnose. Twenty five years ago I investigated incorporating siphon chambers into my pre-cast line. I didn’t like what I found. There had to be a better way!

This “better way” would not require siphoning and have no small piping exposed to the surface of the effluent like on a bell siphon, where floating debris would clog them. Priming would not be necessary and a wide range of sizes and drawdowns would be available. The “better way” would have to be easy to incorporate into the chamber, simple to diagnose, and have minimal moving parts with no valves or seals. Other requirements would include the ability to gang outlets for precision distribution, alternate between outlets, and even sequence three or more, and do it all without power. This was a big list of requirements! The development of the Flout® commenced.

The original idea was the equivalent of pulling a cork out with a float but that was essentially a valve, and valves could be troublesome and expensive. The idea of a buoyant outlet finally struck. A vessel floats in the pool of effluent to be dosed. It has an opening in its top and a pipe extending out of one side. The pipe is attached to a flexible coupler which acts as a hinge as the vessel floats. When the pool reaches maximum depth, effluent spills into the opening, displaces the buoyancy, and sinks the vessel and the pipe. A ballast weight aids in the sinking. The chamber discharges down to the top of the vessel which then drains, regaining buoyancy and starting another cycle. The biggest challenge was locating a source of a durable, flexible pipe coupler to act as the hinge. It had to last many years, allowing the vessel to sink and float thousands of times, while resisting a nasty environment without leaking. A rotating fitting was considered but it had a seal and seals were ruled out. The coupler source was finally located, resulting in the Floating Outlet® , the long name for “Flout”. Nearly twenty years later the first Flout is still working.

The Flout idea satisfied most of the requirements. The basic single or multiple outlet Flouts work independently, and with the help of two other devices can be alternated in pairs or sequenced in groups of two or more.

The other device is called the “Cuebox™”. It can sequence 2 or more Flouts®. It’s called a Cuebox because it:

Yes, a regular billiard ball is the “selector”. A box divided vertically into pairs of cells stands in the pool with the Flouts. Sloping top floats move up and down in the cells, moving the ball from float to float through holes in the cell walls. Every other float has a tube attached to it. Normally the floats keep the tubes above the liquid, but when the ball is on the float, the tube floods and sends liquid to a specially plumbed Flout. The Flout sinks while all the others stay dry. The floats drop and the ball moves to the next cell. The process continues until all Flouts have cycled and the ball returns to where it started. Certain Flouts may be turned on or off simply by rearranging the floats. One system has four Flouts but only two are in use. As needed, more will be turned on.

Since then I have made and sold thousands of Flout systems around the world. From the simplest 8 inch drawdown unit that waters a circular sanctuary made of willows at a monastery in South Africa; a five outlet Flout splitting flow to 5 downstream chambers, each with 3 outlet Flouts in Patterson, NY; a four outlet sequenced system at a NY dairy farm; and a massive 17 outlet, 40 inch drawdown, 3000 gallon dose system at Paul Newman’s Hole In the Wall Gang Camp in eastern CT, the Flout system has opened up a whole new range of possibilities for the Waste Water Design Professional. And it’s all done with gravity and buoyancy, without any electricity!

Here are a few of possibilities:

Rissy offers many other products. For designers who wish to monitor the dosing chamber, an enclosed mechanical counter that needs no power or batteries is available. It’s waterproof and EMP proof, and can be installed inside or outside of the chamber. A weighted float suspended on a corrosion proof wire activates the counter.

PREMIER PLASTICS INC., based near Vancouver in British Columbia, has taken the simplicity of the Flout one step further and pre-assembles the device into ‘ready to bury’ plastic tanks resulting in significant savings in field labor.

For residential size systems, the Company incorporates 3”dia. Flout devices into four sizes of effluent receiver tanks to deliver pre-set discharge volumes between 50 gallons and 250 gallons. Each pre-assembled package incorporates: Polyethylene receiver tank, Flout device, Tank connections and internal piping, 24” dia. x 6” high Polylok riser and cover. All the installer needs to do is level the tank and connect to the 4” dia. inlet spigot and the 3” FIP dia. outlet fitting. (The Flout will still function normally should settling cause the tank to move.)

Call John Richardson at 1800 661 4473 or email to office@premierplastics.com for more information.

Our Commitment to Quality

Providing first class service to our customers is the number one objective at every desk and workstation at Premier Plastics Inc.. The focus of our well trained and stable workforce is consistency, dependability and speed of service – supplying quality septic system and water tank products that reflect a strong innovative and technical capability.

Got something on your mind? – Not sure about how to do it?
Just drop us a line with your questions or concerns and we will have an answer for you by email or telephone within a couple of days. No question too simple. No questions too technical.